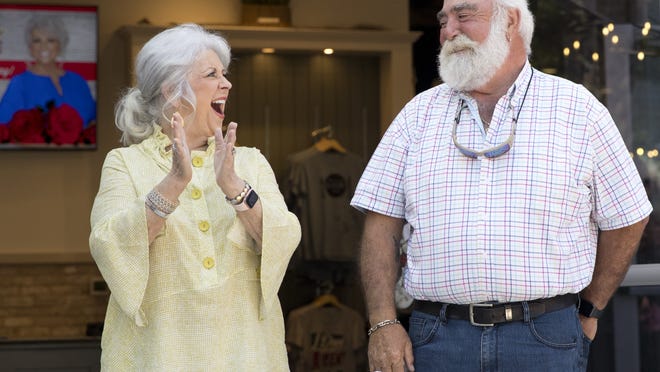 “This world we’re living in is almost a day to day thing. I’m not going to be there when it opens this go around. We’re not having a big grand opening, but I certainly hope to get back there soon,” Paula Deen said Wednesday. “We’re looking so forward to being back with everybody and hoping to bring them wonderful experiences in the coming years. Hopefully it will stir up memories in older folks and create new memories for the younger ones.”

The celebrity restaurateur, TV host and cookbook author appeared with her husband, Michael Groover, in Panama City Beach in May 2019 to celebrate the initial opening of the Pier Park location. After closing in November 2019, the Panama City Beach location now will be operated by Paula Deen Ventures, which already oversees her other Paula Deen’s Family Kitchen locations.

“We had so many requests with people reaching out,” Deen said. “We knew we belonged there from the start. We have no qualms about going to Panama City. We’re so excited.”

At this time, she added, there are not plans to reopen the Destin location or any of the other locations formerly run by Phoenix Hospitality.

“We have a fabulous team,” Deen said. “Paula Deen Ventures has this unique ability to hire the most incredible people and once they get in, they stay.”

She estimated the Panama City Beach location will hire between 130 and 150 people.

“I love when a restaurant opens up to be able to give back to that community. Hopefully, I’ll be able to get back out there,” said Deen, whose Bag Lady Foundation donated $2,500 to Bethel Village in May 2019.

The foundation is named after her Bag Lady delivery and catering service she launched in 1989 out of her home in Savannah, Georgia. In 1996, she opened The Lady & Sons in her hometown. The flagship restaurant now serves family-style dining, just like her Family Kitchen restaurants.

Paula Deen’s Family Kitchen serves meals on platters and in bowls family-style at the table with unlimited servings of two or three Down Home Dishes and four sides. But guests should keep their hands to themselves when it comes to dessert — everybody gets their own, from the signature Ooey Gooey Butter Cake to Banana Pudding and Seasonal Cobbler.

“The dishes that are passed around the tables at Paula Deen’s Family Kitchen are the foods my grandma Paul taught me how to cook in her home kitchen,” Deen stated. “It means so much to be able to share those traditions and recipes with the Panama City community and its visitors.”

“The menu is identical,” Deen said. “The only thing added was Aunt Peggy’s Tomato and Cucumber Salad for those the like a light touch on the table.”

But if you want to go a little or a lot heavier, nobody’s judging — especially after the past year.

“We’ll never forget 2020, will we? It made us reach out for comfort food to feel better,” said Deen, who admitted, “Honey, I eat ice cream every night before bed now.”

While guests may eat as much as they wish while lingering at the table with their family — just a little socially distanced from everyone else’s.

“We have modified the space as tables being further apart, and naturally we’re cleaning, going above and beyond cleaning surfaces,” Deen added.

Amid the pandemic, the Pier Park restaurant will reopen with safety precautions that already have been in place at Deen’s other restaurants.

“We’re going to be extremely careful and thoughtful,” said Deen, who added they’ll be following CDC guidelines. “All will be wearing masks and we’ll ask our guests to wear masks till they get to the table.”

The Pier Park restaurant also features the Paula Deen Store, where fans can find what they need for cooking at home, from cookware to aprons and cookbooks, including “Paula Deen’s Air Fryer Cookbook” — while it lasts.

“The ‘Air Fryer Cookbook’ will be there, but sometimes it’s a struggle for us to keep the cookbook in stock. It doesn’t matter which air fryer you have, it will work with any major brand,” said Deen, who came out with her own air fryer six years ago. “I was late getting to the game with them. I’d never heard of such a thing, a Georgia girl frying something with air? Never; I have a pot full of Crisco.”

But she surprised herself with what has become her go-to appliance.

“I just love it; it stays on my counter. You can cook anything in it; a piece of salmon is so much better in an air fryer, and homemade biscuits, too. It really does well on appetizers, entrees, and I was surprised at the biscuits. They cooked up so beautiful,” Deen said.

As for what’s in her fridge right now, Paula said Wednesday, “I know there’s mayonnaise, milk and butter. I ate all the pineapple last night, so that’s gone. There’s also sour cream, bacon and cheese.”

Rather than doing too much experimenting with creating new recipes in her kitchen, Deen reached out over the past year to her viewers for theirs.

“I asked people to send recipes the way they do some dishes and I tried theirs,” said Deen, who admittedly has received just as much joy from doing the cooking show as the fans. “It’s another way since I can’t physically be with all my family and friends out there.”

She posts a new video daily on YouTube for her Love & Best Dishes cooking show, which was born out of the COVID-19 pandemic.

“I was sitting around with a long face with the pandemic hit, and my son Bobby said, ‘Why are you not doing cooking shows on YouTube?’ and I looked at my assistant Eddie and asked him,” recalled Deen, who said it initially was called “Quarantine Cooking.”

“I was amazed at the response at the people that have followed because that was my goal — to be able to come in and reach people and have them forget all their problems and smile and have fun in the kitchen. I’ve gotten so many letters and notes from people on how much they appreciated this,” Deen said. “There were people who were quarantined by themselves and that really broke my heart.”

Deen, who also had a period of time where she didn’t see family, feels “very blessed.”

“We’ve all been so very careful. I have 11 grandchildren now and my main priority is to keep them safe,” she said. “I have two under 1 year old and three that are triplets that are 2½.”

And now that we’re in 2021, she is finding contentment in acceptance.

“I think acceptance of your situation, just being accepting. It is what it is. I live by the Serenity Prayer. I think it applies very much,” Deen said. “To live today is nothing like the world that I was born into. The Serenity Prayer is to grant me the serenity to accept the things I cannot change, the courage to change the things I can, and please, God, give me the wisdom to know the difference.”

And at the end of the day, there’s also ice cream.

“Vanilla, because you can do anything to it,” said Deen, who goes for Blue Bell homemade vanilla. “Sometimes I eat it with nuts, sometimes blueberries, chocolate syrup, or slice bananas on top.”