Crockett’s Breakfast Camp in Gatlinburg, Tennessee, which churns out huge home-cooked breakfasts and a fascinating hillbilly history, honors the work of the dedicated frontiersman and soldier David C. “Crockett” Maples (born in 1840) and his wife Mary R. Ogles, who were known for serving the best breakfast in the Smoky Mountains.

Lumbering was a huge business in these parts. Lumberjack camps were rough places, and women were expected to turn out meals for their hungry husbands. When Maples returned from the Civil War in 1865, he and Mary had a small general store that helped supply necessities at the lumberjack camp in the Smokies. To grow their small business, they began making home-cooked breakfasts for anyone who came to Crockett’s camp. After World War II the name of the town where they lived was changed to Gatlinburg.

The breakfast menu here includes unusual ways of preparing traditional breakfast foods that render it difficult to make a choice. The Cherokee Corn Pone, a traditional spoon bread with cranberries added at Christmas, is delicious. After one of their famous Hungry Hunters Hunt Camp Skillet Breakfasts, which include eggs, meat, potatoes, grits and their famous biscuits, you won’t need another meal that day. The enormous pancakes are like no other, and it wouldn’t be right to leave without the signature fried cinnamon roll. You won’t have room after breakfast but take one for later in the day.

In addition, they offer a special menu that includes gluten-free and celiac-safe meals. Vegan and vegetarian meals are also available, so our group with mixed dietary needs could happily eat there. We enjoyed the White Oak Flats Daily Post newspaper “from 1886” after we made our selections from the menu inside it.

The log cabin building is filled with memorabilia from the frontier days, and the children who were with us liked exploring the museumlike decor, with many of the items explained in the newspaper. This happily occupies the time while you wait for your meal to be cooked from scratch. Our children were fascinated by the old-time weights, which are pulley operated to open and close each door.

We’ll definitely make Crockett’s Breakfast Camp our breakfast stop when we’re in the Great Smoky Mountains. From there it’s also possible to hike the national park trails or shop in the numerous unique gift and art shops in Gatlinburg, Pigeon Forge or Sevierville, or have fun times at Dollywood. The breakfast you just ate will keep you going through the entire day. 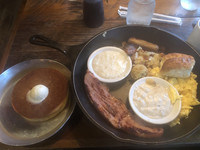 Anyone who eats breakfast at Crockett’s Breakfast Camp in Gatlinburg, Tennessee, won’t need another meal all day. Photo courtesy of Bill Neely. 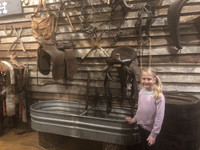 Children enjoy looking at old-time farm implements while they wait for their breakfast at Crockett’s Breakfast Camp in Gatlinburg, Tennessee. Photo courtesy of Bill Neely. 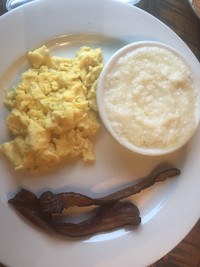 Crockett’s Breakfast Camp in Gatlinburg, Tennessee, provides gluten-free options as well as their meals that include pancakes and cinnamon rolls. Photo courtesy of Bill Neely.

Subscribe to our newsletter for news and special offers on things to eat, drink, see, and do in Pigeon Forge!

You have subscribed successfully!

Please fill all the required * fields.